SagaPro is a proprietary, aqueous extract of Angelica archangelica leaves, sustainably harvested from wild plants grown in the pure air and soil of Iceland. SagaPro is ideal for men and women looking to support bladder strength and urinary tract function.*

Unlike Saw Palmetto, SagaPro is for more than just prostate health. It contains key compounds that support the smooth muscle tissue of the bladder.*

SagaPro is ideal for healthy bladder strength for both women and men.* 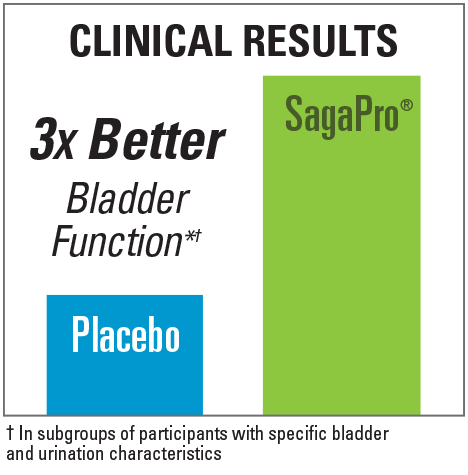 Recommendations:1 capsule daily. When starting to use SagaPro it’s recommended to take 1 capsule twice daily for the first two or three days.

SagaPro® Angelica is grown and harvested in Iceland.

How long until I notice benefits?

Each person varies, but you may start noticing benefits after the first few days. Consider doubling the dose at first, and then dropping to the suggested dosage when you begin noticing benefits.*

Is Angelica safe? I thought that it wasn’t for everybody.

Yes, this Angelica (Angelica archangelica) grows in Iceland and has been safely used and enjoyed for centuries. It is not the same as Chinese angelica (Angelica sinensis), also known as dong quai.

The fruits, leaves, and roots of the plant have been used in folk medicine, and it was cultivated in the Nordic countries during the Middle Ages. Vikings even used this herb as a form of currency. In fact, banning the theft of angelica was actually written into some of the earliest law books in Iceland about 1,000 years ago! These days, angelica tea from the leaves and cereal from the seeds are popular foods in Iceland, and the leaves from this plant are used to make SagaPro.

How does SagaPro work compared to saw palmetto extracts?

What steps are taken to prevent over harvesting?

While angelica is a highly-valued herb, it grows all over Iceland, and is by no means an endangered plant. In fact, its proliferation is even considered too intense in some areas. In certain places, harvesting can benefit local authorities that would otherwise have to eradicate the plant in a costly way. Additionally, the manufacturer works with local people who know their region well. That type of knowledge helps in choosing the best spots, and since local experts can follow the development of angelica fields over many years, they provide information which ensures that the angelica fields aren’t overused.

I gave SagaPro to my 93 year old "mom" and it works great for her. I have shared it with others and they all want more! It works!

I would like to say thank you for such great products. I gave my 88 year old dad some SagaPro Bladder Health for his bladder.* He is taking the SagaPro now and sleeping almost all night. Thank you.

Better than anything else I've tried

This product has helped me a lot. I feel like it has strengthened my bladder muscle and is working better than anything else I've tried.*

Thanks to SagaPro I am no longer preoccupied at every event. My quality of life has clearly increased!

I would never go a day without SagaPro now

I would never go a day without SagaPro now. It truly is fantastic and I would recommend to anybody looking for bladder support.* I now have my own dance school and can teach for hours without any trouble, it has helped me tremendously! Thank you, SagaPro for helping me get back to doing what I love!

I would never have believed that one little tablet could increase my quality of life so much. My wife and I both have much more restful sleep now, too!*

I am very happy to have discovered SagaPro!

I am very happy to have discovered SagaPro! After only a few days, I have seen great improvement.